(1) His parents and his birth

A statue of Patañjali,
founder of the system of yoga
and author of the Yoga Sutras,
the ancient text that establishes
the practice and philosophy of yoga. 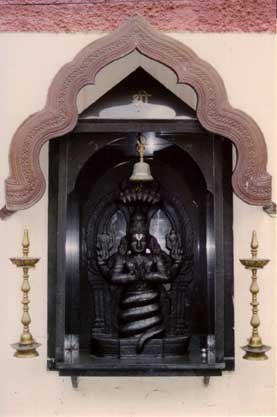 Photograph courtesy of Michael Noche
The above statue of Patañjali
was commissioned by Kofi Busia,
and is housed in the
Ramamani Iyengar Memorial Yoga Institute,
Pune, Maharashtra, India

Almost everything about Patañjali is unknown. Even his most basic biographical details are disputed. And of the little that is known, much is mired in myth.

The dates proposed for Patañjali's birth and life vary by a millennium. Some authorities suggest that he lived and flourished in the 4th century BCE, while others insist that he must have lived in the 6th century CE. A part of the reason for this wide divergence in possible dates is the tradition, common at the time (it existed also in contemporary Greek society and still causes endless problems for historians), to ascribe anything worth saying to someone already acknowledged as a great exponent. In order to make their contributions more acceptable, and to give them some cachet and an air of authority, later thinkers were frequently content to concede authorship of their contributions to one or another of their more illustrious predecessors. Those predecessors thus acquired an exaggerated longevity. In the face of the conflicting evidence the best that can now be done is to come up with a consensus for the most likely dates for Patañjali's birth and death. Given that the knowledge in Patañjali's most widely recognized work, the Yoga Sutras, is presented through a series of terse aphorisms, a date for him of somewhere between the fourth and second centuries BCE becomes highly likely. It was over that period that the aphorism style not only gained extensive acceptance, but reached probably its greatest stylistic peak. Patañjali's work is widely regarded as the finest example extant of the sutra method of presentation. Give or take a century, therefore, somewhere around 250 BCE seems the best bet.

Trying to determine Patañjali's parentage poses further problems. According to one legend he was the son of Angiras, one of the ten sons of Brahma, the Creator; and of Sati, the consort of Siva. If so, this would make him not only the grandson of the Creator of the universe, but also the brother of Brhaspati, god of wisdom and eloquence and chief offerer of sacrifices.

According to another legend, shortly before Patañjali was born the Lord Vishnu was seated on his serpent, Adisesa. (Adisesa is in fact one of the many incarnations of Vishnu). While seated on his serpent carriage Vishnu was enraptured by the dancing of Lord Siva. Vishnu was so affected that his body began to vibrate causing him to pound down heavily on Adisesa—who consequently suffered great discomfort. When the dance ended the weight was instantaneously lifted. Adisesa asked Vishnu what had happened. On hearing about the dance Adisesa wanted to learn it so he could personally dance it for the pleasure of Vishnu, his lord. Vishnu was impressed and predicted to Adisesa that one day Lord Siva would bless him for his understanding and devotion and that he would be incarnated so that he could both shower humanity with blessings and fulfill his own desire to master dance. Adisesa immediately began to ponder on the question of who his mother would be. At the same time a virtuous woman named Gonika, who was totally devoted to yoga, was praying and seeking for someone to be a worthy son to her. She wanted to pass on the knowledge and understanding she had gained through yoga. Concerned that, with her days on earth now severely numbered, she had not yet found a candidate, she prostrated herself before the Sun, the earthly manifestation of the light and presence of God. She scooped up the only gift she could find—a handful of water—and beseeched him to bestow her with a son. She then meditated upon the Sun and prepared herself to present her simple but sincere offering. On seeing all this Adisesa—the bearer of Vishnu—knew that he had found the mother he was looking for. Just as Gonika was about to offer her handful of water to the Sun, she glanced down at her hands and was astonished to see a tiny serpent moving in her hands. She was even more astonished when, within a few moments, that serpent had assumed a human form. Adisesa, who it was, in his turn prostrated before Gonika and pleaded with her to accept him as her son.